Irsfeld, a hard-throwing RHP is most consistent 2022 off the board 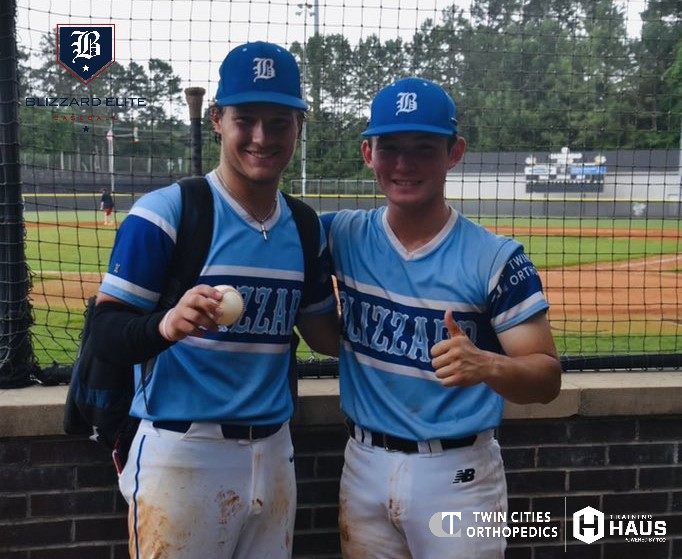 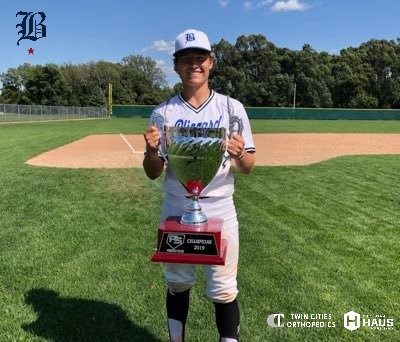 Ben Irseld has been driving up from Sioux Falls, SD since he was 14-years old and has had quite the Blizzard career.  Along with becoming the top ace in the Blizzard program this year, Ben has also served as a fiery leader, durable catcher and infielder.  And while his Blizzard career is coming to close, he and his family have made a great impact on both the program, on and off the field.  We were able to sit down with Ben and his mom and dad, Kristi and Chris and Mankato State coach, PJ McIntee to talk about recruiting, program impact and what the future holds.

Irsfeld’s ‘heavy’ recruiting process started the summer between his junior and senior year in high school where his velo made a significant jump.  Irsfeld, who was 81-85mph his sophomore summer and junior winter, made the 85-88mph jump this past summer.  Couple that with a plus slider and heads turned.

One of those heads was Mankato State Assistant Coach, PJ McIntee.

“I got a chance to see Ben play a handful of times in different local tournaments,” McIntee said.  “Each time I watched him, I liked him more and more.  I watched him dominate some of the best travel teams in the Midwest.”

As things progressed in the recruiting process, Irsfeld found himself liking Mankato more as the conversations continued.

“Mankato offered everything I was looking for in a college,” Irsfield said.  “The size of the school was important.  I wanted a bigger campus and bigger enrollment with a good atmosphere.  The distance from home was also perfect for me; close enough where I can drive home for the weekend and far enough where my mom won’t be in my dorm room every night checking my homework.”

And while the recruiting process was relatively stress free for Ben, his parents had some advice for parents of future baseball players in the Blizzard program.

“The college recruiting process for Ben was probably a bit more stressful for Kristi and I than him,” Ben’s dad, Chris said.  “It is hard not get caught up in the Perfect Game, PBR and whatever else company looking to showcase your kid.  I do believe that they have their place and it helped him with getting information out to coaches that never would have seen him, but I feel that we started too young.  The recruitment started to pick up for him his junior summer and into fall ball.”

“He was undecided on many things,” Chris said.  “So, we made an effort to visit as many schools as we could so he could get a feel for what he likes in a school.  The summer schedule that Blizzard played between his Junior and Senior year made all the difference.  Our team played in front of many coaches most weekends this past summer and the competition was incredible.  I feel that the reputation that Adam has with the Blizzard program attracts those college coaches to the Blizzard games at those tournaments because they know the quality of player that the Blizzard produces.”

Coach McIntee said he has always enjoyed working with Blizzard players.  He has recruited many of them in the past including Cam Kline, Aaron Rozek, Cole Albers and Cory Glieden.

“Our recipe for success on the mound always starts with commanding the strike zone,” McIntee said.  “Ben fits right in with that. He has the ability we look for no doubt about that, but also who he is as a person, teammate, and competitor is what made us feel like Ben is a guy we really want in this recruiting class.”

“The Blizzard guys have all made an impact on our program during their careers here at MSU.  On top of being talented baseball players, they all had the intangibles we want in our student athletes.  I think all of those guys came in prepared for what it takes to be successful in college and already had a lot of the values that matter to us instilled in them.  They are winners on and off the field.

“When we recruit a Blizzard player, we know what we’re going to get.”

And what they are getting is a Blizzard player who has stood the test of time, the test of top-tier competition and a test of getting out of his comfort zone of local baseball.

“Blizzard began for Ben and our family when he asked about playing more,” Kristi Irsfeld said.  “We didn't have a fall ball schedule in Sioux Falls, so we started doing some research on where there was an opportunity.  Evan Applewick (Blizzard Alumni and freshman at Indiana) from Madison, SD was in the program, and I reached out to his dad, Brian, and he had great things to say.”

“I know that there had been a few other kids from Sioux Falls that had been in the program, but at the time, Ben was the only one from South Dakota trying out.  He was able to make the team and felt like he fit in with his teammates from the very beginning.  We tried to make as many practices as possible, even with the four-hour drive.  We decided that we would support him with traveling as long as he had that goal to play college baseball and continued to work toward achieving that goal.  It wasn't always easy getting in the car at 4am or getting home at midnight from practice, but looking back, I am going to miss those car rides with Ben.”

And through all that driving, Ben got more than what he thought he was going to get.

“These guys ended up being my best friends and my best memories are either on the field or just hanging out with the team,” Ben said.  “It’s just about being with the guys, the singalongs in the van on the way to games and staying up probably later than we should in hotel rooms.

“One of my favorite memories is when we won the championship in Vegas and dog piled on the mound!”

The recruiting piece from the Blizzard side to Ben was also a big advantage and help to him along the way.

“Blizzard has been the biggest help of getting recruited just because of the tournaments we play in,” Irsfeld said.  “And thanks to all the guys before us, too.  The alumni deserve a lot of credit.  Every college coach knows who the Minnesota Blizzard is, and a lot of coaches usually find their way over to the field we’re playing on at some point during a tournament just because of the reputation of great players.”

Ben had some wisdom to share with Blizzard players aspiring to play at the next level.

“The advice I would give is enjoy it and go where you feel wanted,” Irsfeld said.  “It was stressful for me, but it was also very exciting.  There is no rush.  You’ll see a lot of guys, even your teammates, who make their decision a lot faster than everyone else but that shouldn’t rush you.  Listen to what coaches have to say and go out and see different schools to see where you would fit in the best and ultimately it’s your decision, not anyone else’s.”

Now that Ben is at the tail end of his high school career, he has a lot to look forward to and a lot to be proud of.

“We have a team full of aces,” Blizzard owner Adam Barta said.  “But I don’t think it is any secret that when Ben was on the mound these last couple of years, it was pretty much a guaranteed win.  He has all the attributes of an ace – competitor, hates to lose, durable and he flat out wins and is a great teammate.  What else is there to say?  If we had 12 “Ben Irsfelds” on the team, we would never lose a game.  He is that good.”

“I think Ben has a chance to make an impact here in our program,” McIntee said.  “His mentality and competitive nature are really what separates him. I think that will help him have success early in his career here.”

What the Irsfeld family will take out of it is a son who is going to a great school, a son who has made many new friends over the past several years not to mention the friends they have made in the Blizzard program that will last a lifetime.

“We have met and become friends with so many great people,” Chris Irsfeld said.  “Ben has made lifelong baseball brothers.  So much goes into the tournaments, games, and practices, but it really is so much more.”

“Kristi and I are excited for Ben and the opportunity that he has to play college baseball.  He had great coaches who taught him so much about the game and life.  Lonnie, Eddie, Ben and Andrew and Coach Barta and many others are guys that Ben can call or text at any time.”