Cooke takes on challenge as hard work is just beginning 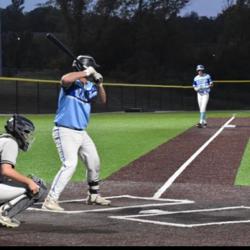 Jackson Cooke, a long-time Blizzard veteran, has committed to Division I University of Tennessee - Martin.

Cooke, who joined the Blizzard program when he was 10, is a hard-hitting offensive catcher and made his decision just recently after a long recruiting process that included a number of schools in Minnesota and around the country.

We sat down with Cooke recently and talked about recruiting, off-season workouts, tournaments, Blizzard memories and some of the coaches who have impacted him.

Blizzard – Covid obviously played a part in the recruiting process for the 2021 and 2022 grads.  How were you able to stay in front of coaches during the shutdown time?

Cooke – COVID has really made it hard on 2022 recruits, and I tried to post more videos on Sports Recruits (now ACES Nation – Blizzard recruiting platform) including both offensive and defensive videos but was able to work with Rapsodo hitting and posted analytical metrics too. I also was proactive in filling my schedule by adding tournaments on off weekends.

Blizzard – Where did University of Tennessee first see you play and how long was the process with them?

Cooke – UTM first saw me play in Hoover Alabama with Team Elite in June, just after the NCAA restrictions were lifted.  I hit a 2R HR in a 2-0 win and they happened to be there. They contacted the coach with TE first and started following my games. It was a long process, and was over a month of communication before they made their first offer.

Blizzard – What were some of the attributes that appealed to you ?

Cooke – The most appealing parts of UTM for me was the size and rural setting of being in Northern TN.  The programs that are offered at the school have a strong support system for athletes.  (The other piece that really helped was) the quality and playing experience of coaching staff.

Blizzard – What was the ‘home run’ for you in regards to making it your final choice?

Cooke – The biggest deciding factors in choosing UTM were the realistic opportunity to compete to start everyday as a true freshman. Their (senior) catcher is graduating after this year and he has started 95% of the games since he was a freshman.

The other two biggest factors were UTM staff didn’t rush my decision, they touched base weekly and reassured me I was their first choice, but still allowed me the time I needed to decide. I also feel with the playing careers of Coach Jenkins as a catcher with the Royals and Coach White, a pitcher with the D-backs and Rangers I will have daily access to high level development that will allow me to continue to improve.

Blizzard – Who was most of your communication with?

Cooke – Conversations were mostly with Coach White (recruiting coordinator). Topics were just as much about life as they were about baseball, getting to know me and me the program. While on campus I spent time with Coach Jenkins and that discussion was about catching, the position and expectations. The coaches have a very regimented program in place once I get to campus, but it’s already started. They have sent me a workout and mobility training program and schedule to prepare for next fall.

Blizzard – How did Blizzard help you with the recruiting process?

Cooke – Blizzard program helped me with the recruiting process in multiple ways. The first way was meeting Barta and him telling us what to expect, what to know, and how to prepare for speaking with a college coach. Barta has always been a sounding board for me and someone I trust has my best interest in mind when he is giving advice. Barta has also always been willing to contact schools/coaches and present opportunities through his contacts in college baseball.

Blizzard – So now that your decision has been made, what do your workouts look like before you arrive at UTM?

Cooke – Currently I am in the gym working on strength, cardio and mobility three days a week. One thing I have always done is hit regularly.  I try to hit five to six days a week for 45-60 mins a day and I will continue that throughout the winter.  My schedule for baseball will also include three days a week of specific catching training (receiving/blocking) and I will also work at increasing my arm strength as I did last winter.

Blizzard – What was one of your favorite Blizzard memories?

Cooke – My favorite memory on the field was when we beat the Royal Scout team in Iowa. My favorite off the field moment has always been being with my teammates at Sunset Station during our annual Vegas trip.

Blizzard – What Blizzard coach has stood out for you in your time with the Blizzard ?

Cooke – Trig Peters was my first Blizzard coach who has always stood out to me.  From my first (Blizzard) game in Arizona with him as a 10-year old, and still today, he has always been there for me. He made sure he communicated expectations.  He’s always checked in and made me feel he cares more about me and my well being over anything else.

Cooke will begin his freshman season at University of Tennessee – Martin in the fall of 2022.