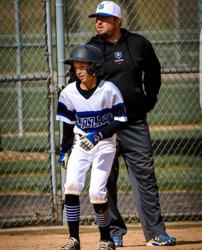 Tollefson joins the MYAS staff after 15 years with the Minnesota Blizzard Baseball Academy, where he served as their Program Director. Tollefson helped grow programs such as the Blizzard Academy’s Elite Pitching Program, the Advanced Fall Baseball League and the Fall Development League. Additionally, Tollefson was a successful coach at the Blizzard Academy, leading several nationally-ranked teams.

“I’m excited for JT,” Blizzard owner Adam Barta said. “Jesse’s contributions have left a significant mark on our program, and he has helped develop some of the most popular Blizzard offerings. Jesse is a dear friend, so it is tough to see him leave, but I am also excited to collaborate with him and MYAS, and I know this is such a good move for him and his family.”

Tollefson will continue his duties as a coach for the Minnesota Blizzard during the fall and winter seasons while maintaining his full-time position at MYAS headquarters in Spring Lake Park.

“It’s hard to put into words what my time with the Blizzard has meant,” Tollefson said. “I’ve had the opportunity to work with so many wonderful people. Adam has been a great friend, mentor, and boss over the years, and I’m thankful that I get to continue with the program in a coaching capacity. While leaving a full-time role with the Blizzard is difficult, I look forward to bringing that same passion to MYAS and impacting youth baseball players, families, and communities on a broader level.”

Tollefson’s duties at MYAS will include the administration of Gopher State Baseball tournaments and leagues, training opportunities through the Rising Stars Baseball Academy, and more.

MYAS Executive Director, Dawson Blanck, has expressed excitement about the development of new programming with the addition of Jesse’s skills, talent, and years of experience.

The Minnesota Blizzard and MYAS will continue to work together in spaces of common interest outside of the community-based youth baseball season to provide new opportunities for youth baseball players.

Cole Albers, who currently works full-time at the Blizzard Academy, will be taking on a more significant role at the Blizzard Academy, including Academy operations and team management. Eddie Gerald will remain the program’s lead hitting instructor, while Kellen Rholl, Michael Jensen, and Adam Barta will hold down their duties as pitching coordinators. Bryan Sanchez, a Blizzard coach and media manager for the academy, will also be taking on added responsibilities.

Tollefson will begin his duties at MYAS on November 14, 2022.

About the Minnesota Blizzard

The Minnesota Blizzard is the most successful traveling and club baseball program in Minnesota and among the top select teams in the Midwest, winning 150 national tournaments and placing in the top four 305 times since 2003.

The Blizzard program draws players ages 10u-18u from all around Minnesota, including Albert Lea to Duluth, and has had several players from the Dakotas, Iowa, Wisconsin, and even Canada. Our Blizzard Baseball Academy, a core part of the Blizzard program, offers individual lessons, strength training, and has avenues for our players to participate in showcases, fall leagues, and tournaments.

More than 450 Blizzard players have committed to play college baseball, and 63 have been drafted by Major League Baseball organizations or have signed as professional free agents in the last fifteen years. It is one of the most well-respected programs in the Midwest and has garnered attention from KSTP 5, Kare 11, ESPN 1500, Fox9, Channel 6, the Star Tribune, and the Upper Deck Report, among others. The vision and values of the Blizzard’s “Big 5” drive our core values and guide players through their youth, into high school, and onto college and professional baseball.

Minnesota Youth Athletic Services, Inc. originated in 1991 as a 501(c)(3) nonprofit organization dedicated to improving and enhancing youth sports programs and services (leagues, tournaments, events, training/development, educational offerings, and resources) for Minnesota’s youth athletes, coaches, parents, officials/umpires, and parent-volunteer athletic associations. Today, the MYAS is Minnesota’s largest multi-sport organization and acts as a central clearinghouse for youth sports, with more than 150,000 kids participating in programs and services each year. The MYAS is committed to providing a safe, positive, and productive experience for today’s youth athletes.

The MYAS recognizes that participation in athletics is one of the healthiest and most cost-effective options for young athletes to make good choices about life’s many decisions. This can be achieved through promoting sportsmanship, teamwork, and cultural interaction through sporting competition as well by providing the highest quality athletic programs for Minnesota’s youth athletes while serving as an informational channel that links hundreds of regional volunteer youth sports programs throughout the Gopher State.