Busch, a three-year veteran of the Minnesota Blizzard program, is the top positional pro prospect in MN.

Busch will have decision to make in the spring of 2016 - College or MLB? 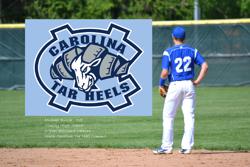 INF Michael Busch (Simley High School) and Minnesota native has committed to the University of North Carolina.  Busch is the third 2016 Division I signee and eighth Division I commit overall this year for the Minnesota Blizzard program.

The slick fielding left-handed hitter who plays shortstop for Simley High School, is also a standout quarterback, and has positioned himself as one of the top prospects in the 2016 class.  With above-average speed (6.65 60 yard dash), great athleticism and feel for the middle infield, a bat that plays at the next level, Busch may have to consider whether professional baseball or being a Tar Heel is the next step.  But with a near 4.0 GPA, his prowess in the classroom and his academic future may be too strong to keep him away from college.

Busch, who tried out for the Blizzard when he was 16-years old, was a standout at tryouts his first year and recalls what it was like on his first day with the program.

“I believe the first time I had heard about the Blizzard was when I was about 13 years old,” Busch said.  “Someone had told my dad about it and we started to look more into it.  I remember my first year of tryouts being very nervous and excited at the same time.  Nervous because I was competing against the best competition not only in the state but the nation.”

“Busch was different,” Angelo State assistant and former Blizzard director Johnny Anderson said.  “At tryouts, the way he moved in the infield was superior to the rest.  He was quick and agile, made all the plays – and he could hit!  That was what really separated him from the pack.  His bat speed and his ability to hit could have put him on a varsity team.  I remember thinking – this kid is going to play pro ball someday.”

After tryouts, Busch made a Blizzard Elite team.  Once the season got underway, Busch said one of the separators and huge advantages of playing for the Blizzard was the high level of competition both on his team and the teams they were playing against.

“Traveling tournaments was the same thing,” Busch continued.  “Every kid was a hard thrower with moment.  In order to get the most out of a player, you have to test them and challenge them and that happened.”

Busch, who is a focused grinder, has worked very hard putting in time with his high school, legion as well as the instructors at the Blizzard Baseball Academy.  Whether it be hitting off a tee by himself in the corner, working with his teammates or getting instruction from one of his Blizzard coaches, Busch has sacrificed a lot to be one of the best.

“Busch is one of those guys where you can catch yourself watching instead of teaching,” Blizzard owner Adam Barta said.  “He’s just so smooth in everything he does.  You almost forget he is 17.”

“He’s very receptive to instruction and is diligent about how he goes about his business,” Barta continued.  “He is dialed in at practice which you don’t see all the time with younger players.  It takes patience to really learn how to practice.  He’s got it.  He’s a gifted athlete who is getting better all the time."

Busch talked about some of the instruction he received at the Academy both on and off the field.

“I found myself developing as a person and a player,” Busch said.  “Some of the lessons I learned had to do with my swing and fielding.

I remember I started my hands too high and lowering my hands helped me keep my barrel quick and stay through the zone longer.  I saw an improvement in my consistency and power immediately.  The little things that the Blizzard coaches taught me made a big difference.

With fielding, I never knew how much having good footwork helped with fielding ground balls and making tough plays easier.  I was taught very well by every single coach about things so specific like flipping a ball palm up instead of sideways turning double plays.

On life lessons from the Blizzard ...

One of the biggest life lessons I have learned from the Blizzard staff is to surround yourself with the right kind of people.  There is nothing worth getting in trouble for and having something taken away.

And those lessons on hitting and fielding got Michael to point where he got to show off his stuff that got the attention of Scott Jackson, Assistant Coach at UNC and even some pro scouts including Chicago White Sox Area Scout JJ Lally.

Coach Jackson and Lally both saw Busch at the Area Code workouts for the White Sox as well as ScoutStop’s Select 60 at CHS this past summer.

“Mike is an advanced and polished high school hitter,” Lally said.  “He has the ability to use all fields and has instincts to hit.  He is a plus runner, has a quick first step and is a top-of-the-order type of guy.”

Busch talked about the exposure he has had and some of the events that he has attended this past year and how that helped him got to UNC.

“I showed up at the (ScoutStop) events thinking there were going to be a couple dozen college would be there,” Busch said.  “But there were rows of coaches at the event that I was at.  Coach Jackson from UNC saw me at the ScoutStop Select 60 last summer.”

And while he had several schools interested in him including Minnesota, Nebraska, Oklahoma and several others, UNC rose to the top.

“I chose the University of North Carolina because they play in one of the best conferences in the nation,” Busch said.  “The coaching staff seemed like awesome coaches (on my visit) and even better people.  The education is one of the tops in the nation and is one of the main factors in my decision.”

And while Busch has BIG things to look forward to including a great education, playing baseball for the Tar Heels and a potential future as a professional player, Busch has taken away a couple of lessons from the Blizzard program.

“On and off the field I have never met a greater group of guys and coaches,” Busch said.  “Blizzard baseball is not ALL about baseball.  The coaches care more about respecting (the game, your teammates), the hotels than they do about winning or losing.”