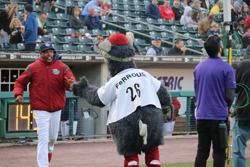 Darryl Robinson, the Triple AAA Hitting Coach with the Philadelphia Phillies, will be teaching an advanced course in hitting coined - Going to BATtle - at Blizzard Baseball Academy.

D-ROB will be beginning his 28th season in professional baseball as a player or coach, and has guided Astros and Phillies minor leaguers in California for the past nine seasons.  Robinson spent the previous eight years as the hitting coach of the Advanced Lancaster JetHawks in the California League, a position he first assumed in 2009.

He was named Cal League Hitting Coach of the Year in 2013 when his squad led the entire minor leagues in runs (976), walks (669), on-base percentage (.384) and OPS (.853).  A season later, he helped Lancaster to the California League Championship.

Robinson's coaching career followed him playing professionally for over a decade (1986-1998); he was a second-round draft pick of the Kansas City Royals in 1986, playing seven seasons with that organization.

This camp will include all the techniques, drills and concepts that hitters can use in their daily hitting routine.  It will include drill work, t-work, front toss, pitch recognition, mental approach and everything need to go to BATtle in the box.

This is a once in a lifetime opportunity and we are incredibly fortunate to have Darryl a part of the Blizzard Academy.  If you are interested in signing up, please do so soon as these will fill up very quickly!

To sign up for this camp, please email both:

Payment can be made the day of camp!
Checks payable to: Blizzard Academy